The photo archive of the Frobenius-Institute mainly consists of the photographic images that have been obtained from the various expeditions and research travels from the beginning of the 20th century onwards, the largest part of which are available in the form of black-and-white negatives. The collection includes negatives in 13x18 cm size and all possible in between formats down to the usual 35mm frame. All materials commonly used during this period are represented as base: glass, cellulose nitrate ("Nitrate Film"), cellulose acetate and polyester. The state of the originals varies greatly according to their age, the durability of the base, the care taken at the time on their developing, any subsequent chemical treatment, and generally, according to the previous storage and intensity of use.

In principle, all photographic documents are subject to a process of degeneration, even if this process usually proceeds rather slowly. On the one hand, the Frobenius-Institute works against this by means of a climate room to create favourable conditions for the archiving of the original photo negatives, colour slides and motion picture films. On the other hand, as far as black-and-white negatives are concerned, the Frobenius Institute takes reproduction measures in the form of copying the negatives into positives on silver film, which in turn ensures the long-term preservation of the image information they contain. For more than twenty years now, this has been done in all those cases in which the photographs are needed for academic or publishing purposes, for media productions or exhibitions. In addition, negatives of particular interest that may already show signs of deterioration will also be copied, as far as possible.

The technical procedure is carried out by the own photo laboratory, which is still run by the Frobenius Institute. Peter Steigerwald, who is responsible for the various photographic and photoarchival issues at the Institute, has specialised in this work with silver film at a very early stage and can continue to do this today, where the range of materials and equipment required for the work has been substantially reduced due to the dominance of digital technology. The traditional contact printing process is applied, in which the original negative or a complete film sheet is copied in direct contact ("Schicht auf Schicht") onto an unexposed silver emulsion medium, traced by means of an exposure, so to say, and consequently, in which the resulting positive is always obtained in original size. Some of the film materials used are mainly blue sensitive, others are orthochromatically or panchromatically sensitised, which plays a role in copying negatives which already show yellow stains. All copy films have an excellent resolving power and due to a specially adapted developing chemistry give results in a fine gradation of the reproduced density values ("grey tones"), even if the original negative has a large contrast range. The copying process and the transfer of the different densities is regularly checked and evaluated by creating curve diagrams. The transfer curve can be adjusted to the negative to be copied by varying different parameters. Special care is taken to ensure that, by a largely linear transfer of the image tones, all details are retained in the lights and in the shadows of the photograph. In the best case and with suitable negatives, it is even possible to improve the differentiation in the critical areas to a certain extent by achieving an approximately "reciprocal" or inverse S-curve. Many of the reproductions obtained in this way are subsequently more useful as a subject for digitisation than the original negatives would be. Digitisation is carried out in high resolution either by scanner or by camera. In order to meet high demands, the interpositives can also be scanned "wet", and thanks to the high resolution of the copies, even glass plate negatives can indirectly be digitised using a drum scanner. If required, the interpositives can also be used for producing new working negatives (hence the original name), which in turn make it possible to get exhibition prints on silver gelatin paper. The shelf life of film positives and film negatives is highly increased by selenium toning at the end of the developing process. In the evaluation of professionals, it is measured by centuries for work carried out in this way on silver film and for adequate archiving.

Glass plate negative from the collection of the former Deutsche Kolonialgesellschaft 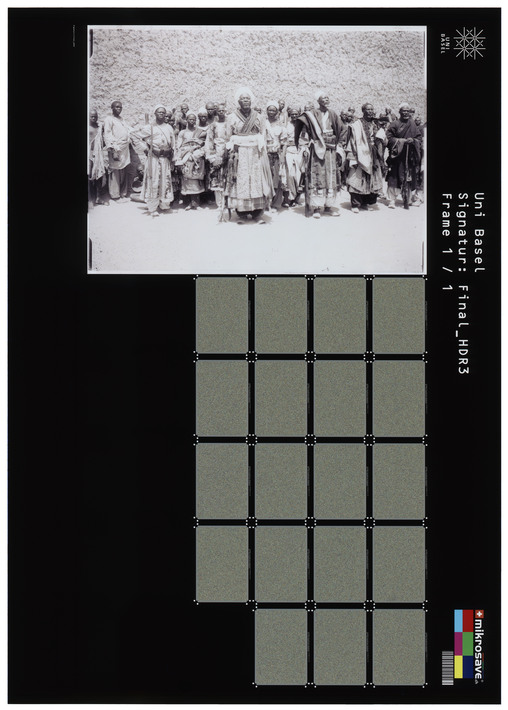 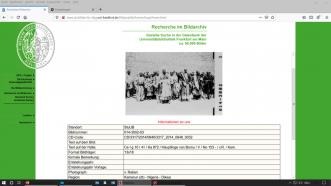 Koloniales Bildarchiv, image in the database of the University Library

left: Exemplary processing of a glass plate negative of the format 13x18 cm with an extremely high contrast range (D-log = 0.55-3.90) from the Bildbestand der Deutschen Kolonialgesellschaft. The historical picture reference reads "Häuptlinge von Bornu", the photograph is said to be taken in Dikwa (today Nigeria, Borno State) in the then colony Deutsch Kamerun and is attributed to the Hauptmann and commander of the base Ernst von Raben. The collection is part of the archives of the Johann Christian Senckenberg Universitätsbibliothek, the picture has the number 014-3012-03). On the left the original negative, on the right an interpositive from 2011, made for demonstration purposes.

In the middle: Also in 2011, the same negative was digitally reproduced by the University of Basel as part of their mikrosave.ch® project and, for the purpose of long-term archiving , was output by laser exposure on ILFORD's Ilfochrome Micrographic® colour microfilm, which was still in production at that time. The result can be seen here in a combined version of both figurative and coded output.

right: Reproduction of the photograph in the corresponding database of the Goethe-University in a version that was the result of a mass microfilming. 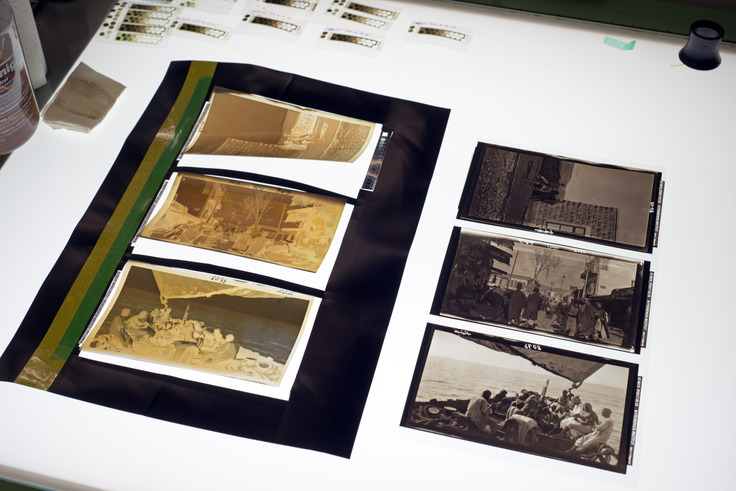 Nitrate film negatives from the 1915 expedition along with new interpositives

On the light table: three 10x15 cm film negatives of Leo Frobenius' expedition and secret mission to the Red Sea in 1915 (probably with photographs by photographer Robert Türstig). The backing material is cellulose nitrate, the negatives already show severe staining and other physical shortcomings. On the right you see three interpositives from 2017, which were made in connection with an image order. 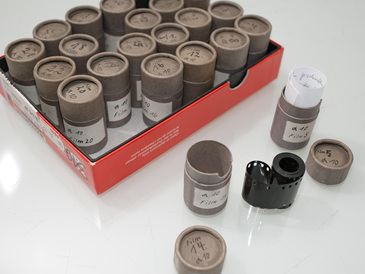 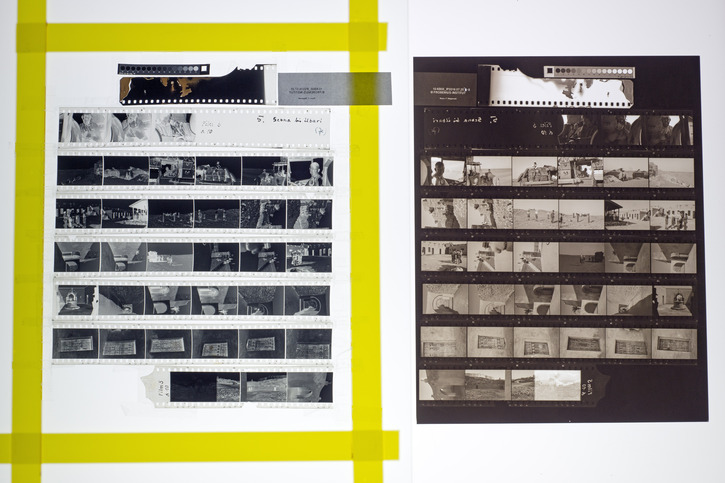 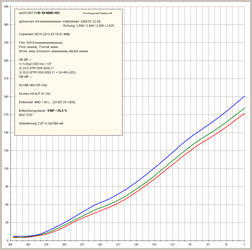 In the middle: The 35mm film no. 5 of the tenth expedition from 1932, cut into strips and mounted on a glass plate, showing early Leica photographs mainly taken by Adolf Ellegard Jensen. The film was stored for 85 years in the archive as an uncut film roll before making the copy. The contact sheet of the complete film was made in 2018, the comparative view was taken from the hand during the workflow.

right: Curve diagram from the sensitometrically determined result values of the grey wedge copied together with film 10-KB05. It allows the control of the transfer of tonal values achieved by the copying process and at the same time shows the hue of the obtained, selenium-toned interpositive (red stands for the cyan density, green for magenta, blue for yellow). 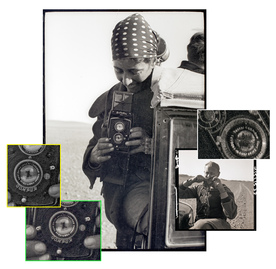 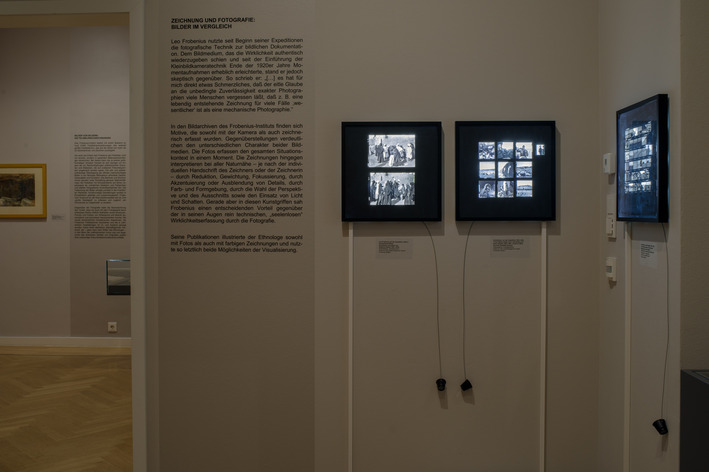 Exhibition with photo light frames at the Museum Giersch 2020

left: Karin Hissink, as she leans out of the car window, aiming at Hans Rhotert with her Rolleiflex 6x6 camera on December 29th, 1934, near the archaeological site of Kilwa (now Saudi Arabia). Her shot (mounted on the right) shows him continuing to transport the film inside his brand new Zeiss Ikon Super Nettel 35mm camera. A detail of the 35mm original negative (outlined in yellow) is shown in comparison to the interpositive (green), the overall views are derived from the copies.

right: Presentation of various film positives, including the two shots from the example on the left, on light tablets in the exhibition "Frobenius – Die Kunst des Forschens" in the Museum Giersch of the Goethe-University (Frankfurt a.M., 2019), with attached watchmaker's magnifiers for viewing the photos in detail. 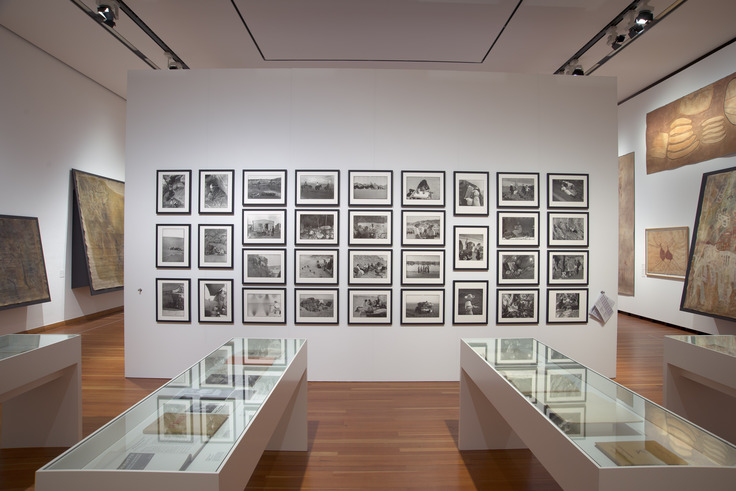 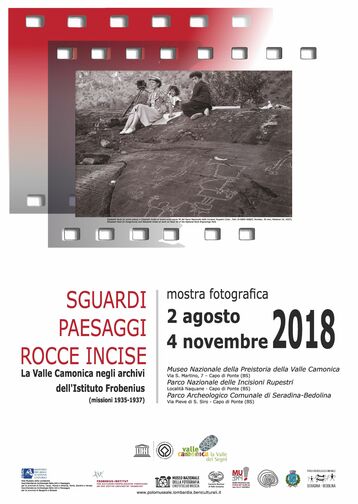 Poster on the photo exhibition at Valcamonica 2018 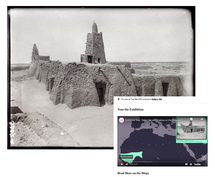 In the middle: In 2017, almost 2000 black-and-white negatives of the formats 24x36 mm, 6x6 cm and 9x12 cm were copied to interpositives for a UNESCO-sponsored research project on the rock paintings of Valcamonica (Italy) and the latter were subsequently digitised at high resolution. The photographs are the result of four expeditions that researchers of the Frobenius Institute made to the region during 1935, 1936 and 1937. In 2018 a selection of these pictures was presented in an exhibition at three locations in Valcamonica.
See also: „After eighty years of sleeping deeply“, in: Alberto Marretta, Maria Giuseppina Ruggiero (Editor), La Valle Camonica negli arcivi dell’Istituto Frobenius. Documenti e immagini (1935-37), 65–72. Capo di Ponte (Italy): Litos.

right: The Djinger-ber Mosque in Timbuktu (Mali) in a photograph taken between 1907 and 1909, presumably by Leo Frobenius himself. Composing from the digital master provided to The Met Fifth Avenue in 2019 for the presentation of the image in the exhibition "Sahel: Art and Empires on the Shores of the Sahara" (New York, 2020) and a screenshot from the exhibition trailer on YouTube. The original photo is available in the form of a glass negative (9x12 cm), the elaboration was done using a film positive made in 2019.